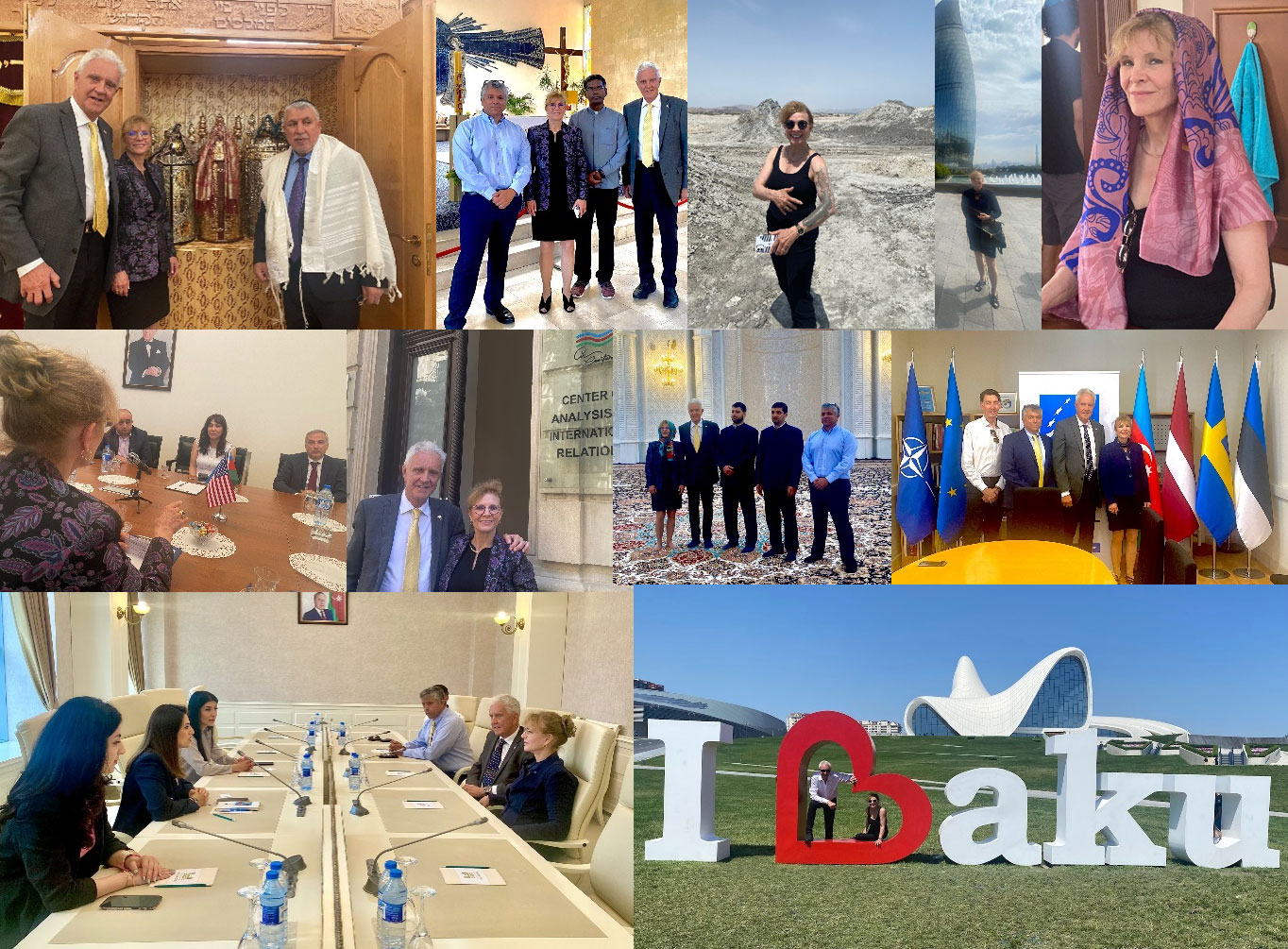 This past week found us in the most amazing country of Azerbaijan. First, we would like to thank the Honorable Nasimi Aghayev, Consul General of Azerbaijan in Los Angeles and the Dean of our Consular Corps, and his staff, for putting together this most amazing and intellectually stimulating trip for us. Azerbaijan is an oil rich country and has the architecture and infrastructure to prove it. We stayed at the amazing Fairmont Flaming Towers, pictured above, in Baku. We received a few “be careful” admonitions before leaving but found Baku safer than any Western city we have ever visited.

Azerbaijan was one of the first countries to adopt Christianity in the 300’s AD but after the Ottoman conquests, became a Muslim country – Muslims now constitute about 93% of the population but what is so amazing and different than anywhere else in the world is the peaceful coexistence between the various religions and ethnic groups in Azerbaijan. There are still Christian communities, and Jews have lived in Azerbaijan for over a thousand years, in peaceful coexistence with their Muslim neighbors. The State funds the various mosques but also synagogues and Christian Churches.

What we found most amazing is that Sunni and Shiite Muslims have no strife in Azerbaijan and pray together in the same mosques! We were fortunate to have one on one meetings with the head imams of the largest mosque in Baku – one Sunni and the other Shia; with the head of the Catholic Church in Baku; and with the head of the main synagogue in Baku as well with the rabbi of another synagogue that serves the Mountain Jewish community of Guba. We were fortunate to have private meetings with leaders of a think tank, the Center of Analysis of International Relations, which reports directly to the President; and similarly with members of Parliament who head the Foreign Relations Committee. We also managed to squeeze in a trip to the Latvian Embassy in Baku.

Yes, there was time for play as well – we visited many natural wonders, mud pots, natural eternal flames, archeological sites with 40,000-year-old hieroglyphics, bazars, museums, and were even guests of the government at a production by the National Ballet Company at the Opera House one evening. The meals were amazing. Our overall takeaway was the peaceful coexistence that exists within the country, always has – we would love to see that commitment to peace adopted by countries around the world!

HCG (Human Chorionic Gonadotropin) is a hormone present in both males and females. It is best known for spiking during pregnancy. During pregnancy, HCG almost completely controls a woman’s metabolic functions. In non-pregnant persons research suggests HCG similarly increases the metabolism and promotes lipolytic (fat burning) activity in both men and women.

Weight loss with HCG is possible! At OCPS we put our clients on an HCG plus low-calorie diet protocol for 3 weeks followed by a stabilization phase for 3 weeks. During these first 3 weeks, the clients are on either injectable or oral-sublingual HCG. The injectable HCG (125 IU) is provided in a pre-filled syringe to be injected daily by the client himself or herself. The first phase also includes a strict very low carbohydrate 500 calorie diet protocol during which clients are expected to lose half to one pound of weight a day. Following the 3-week program they proceed into the phase called the stabilization phase where they are expected to maintain the weight loss. This stabilization phase involves adhering to a more varied diet protocol that avoids starches and sugars. Dieters may gradually lose weight in this phase, but it is not intended to have the same results as the HCG 500 kcal Phase.

To be admitted to our program, we require prospective clients to undergo a personal consultation (in person or virtually) and a basic set of labs. The lab tests consist of a basic metabolic panel, thyroid-stimulating hormone, and a complete blood count. Based on the lab results and health history, our OCPS physician clears clients for the program.

Staci Compoginis, OCPS’s Registered Dietitian provides education and customized support to clients as they proceed through the various stages of the protocol. This is provided one-on-one with the help of menu plans, diet booklet and guidelines on what to eat as well as lifestyle and motivational counseling. Clients also receive a weekly IV dose or sublingual spray of high potency vitamins and minerals. If you would like to explore this further or are interested in a consultation, please contact me at staci@ocps.com.

If you want to see if you can have the shape of your body improved, contact us for a complimentary consultation:
please call 949-888-9700 or visit www.orangecountyplasticsurgery.com
Or for MA location, call 508-755-4825 or visit www.salisburyps.com
You can write to:
Dr. Compoginis at compoginis@ocps.com
Dr. Bunkis at bunkis@ocps.com
Dr. Ekstrom at mds@salisburyps.com

There are a number of holidays each year, which are more special than others are,…

Last Friday my wife, Staci, graduated from Loma Linda University with her Doctor of Public…