My upper lids droop over my eyelashes and I would like to have them fixed. I have seen two plastic surgeons, one who agreed that he could help me with my upper lids, but another told me I’d have to have a brow lift as well. My brows are fine with me and I do not understand why a brow lift would be necessary? Why would a surgeon recommend a procedure I did not ask for? Colleen Seal Beach Rarely would we suggest a procedure about a body part not brought to our attention by a complaint originated by a patient. The two exceptions I can think of relate to chin implants and brow lifts. Patients with weak chins who come in complaining of a large nose or a droopy neck cannot get a great profile without addressing the weak chin because the chin, nose and neck all contribute to the profile. Likewise, if a patient complains of heavy upper eye lids, we have to analyze the balance between the eyelid and brow position. Our duty is to lay out the options for a patient and each person has to choose the procedure(s) that will give them their desired results. In a pure upper eye lid blepharoplasty, the thin skin excess of the lids is removed but the distance from the lashes to the brows is not changed. If a patient desires a more open–eyed look, this will only be accomplished if a brow lift is added to the eye lid procedure. Not only will the eye area look more open following a brow lift, but during a brow lift, the frown lines between the brows will be minimized because we can remove some of the muscles that cause these frown lines, called the corrugator and procerus muscles. And finally, occasionally I’ll see a patient with hooding caused by low brows who thinks they would like an upper eyelid blepharoplasty, but when I gently elevate the brows, I can see that this patient does not have an excess of thin, upper lid skin, just low malpositioning of the brows and I will recommend to this patient that a brow lift be performed without a lid procedure per say. A brow lift is a minimally invasive procedure. In the endoscopic brow lift, a few half inch incisions are made behind the hair line, allowing the instruments to be inserted. The tissues are freed from the bone, the muscles sculpted, and the brows raised a few millimeters. The brows are fixed in their new position with a variety of devices. The incisions are rarely perceptible after healing has taken place. Occasionally, a brow lift will be performed as an isolated procedure, but more commonly it will be combined with a minimally invasive midface or thread lift, an eyelid procedure or a Natural Facelift.

Pre & Post Upper Lid Blepharoplasty: 35year old patient of Dr. Juris Bunkis of Newport Beach before and after an upper (and lower) lid blepharoplasty without a brow lift. Note that the distance between the lashes and brows is unchanged. The main benefit of the procedure was to remove the heavy eyelid skin from his lash lines. 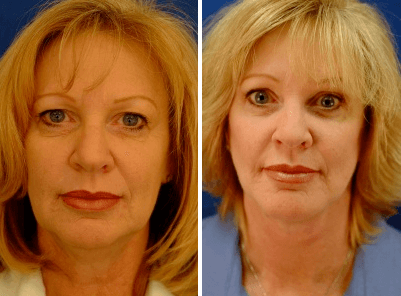 Pre & Post Upper Lid Blepharoplasty with Brow Lift: 54 year old patient of Dr. Juris Bunkis of Newport Beach before and after an upper lid blepharoplasty (with a Natural Facelift and Lower eyelid blepharoplasty) and a brow lift. Note that not only has the excess upper lid skin been removed, but the lash line to brow distance has been increased. 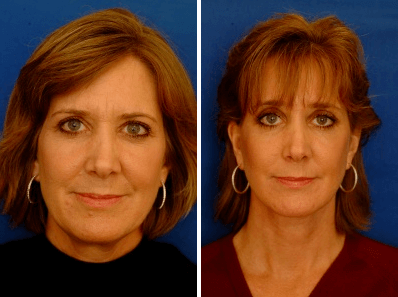 Pre & Post Brow Lift (and Facelift, no upper lid blepharoplasty!): 47 year old patient of Dr. Juris Bunkis of Newport Bunkis before and after an endoscopic brow lift and facelift. In spite of her hooded upper lid appearance before surgery, raising her low brows showed that she did not have any excess eyelid skin.

Please send any questions you would like to see answered in a future blog to [email protected].

Feel free to contact Dr. Bunkis in Newport Beach at 949-888-9700 to schedule a complimentary consultation or visit www.orangecountyplasticsurgery.com for more information.