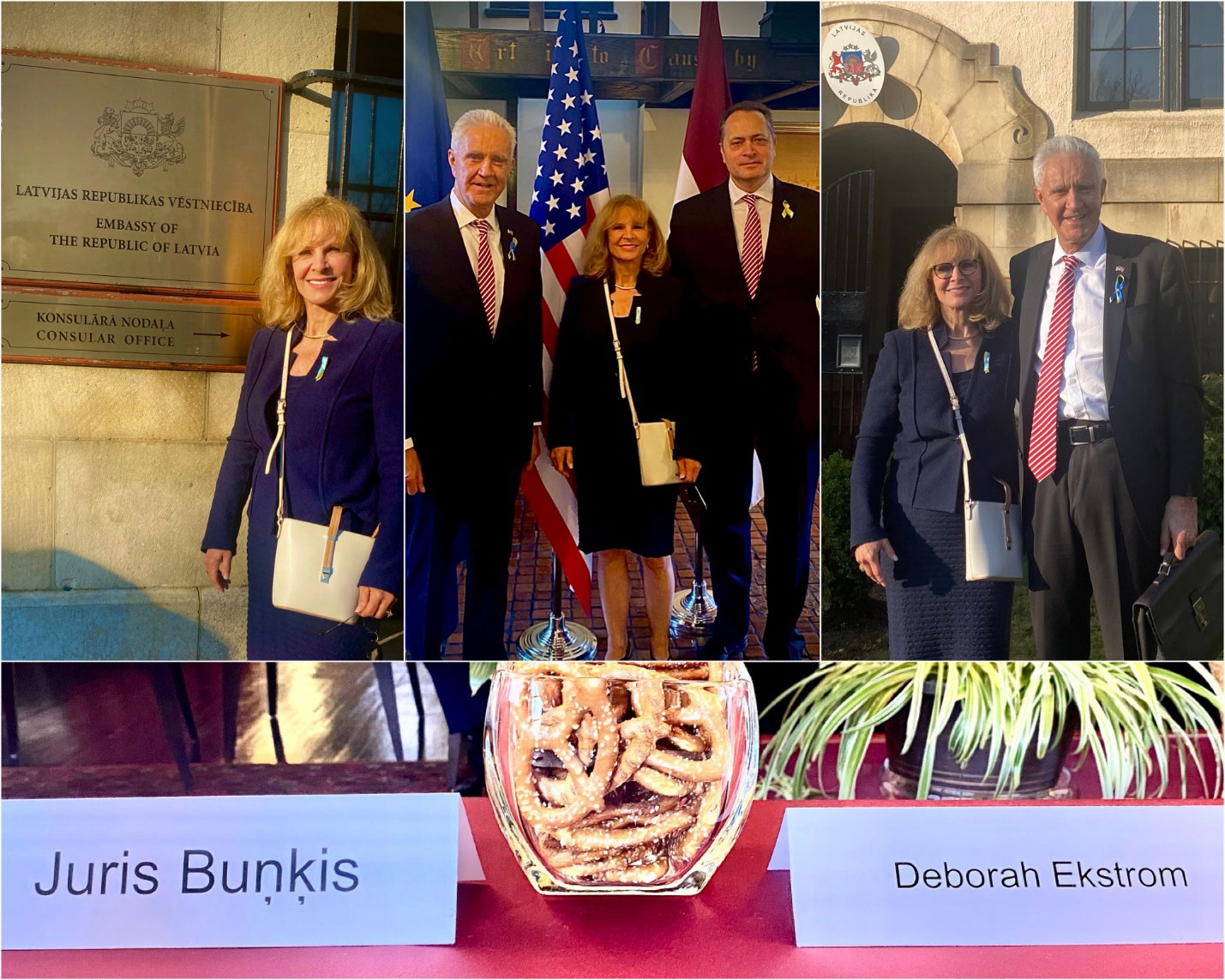 With Ambassador Selga, meetings at Latvian Embassy in Washington, DC

We attended the annual consular meetings at the Latvian Embassy in Washington, DC this past week. We heard an update on the Three Seas Initiative (www.3siif.eu) and on Rail Baltica implementation of a rapid rail system based on European gauge rail system ranging from Estonia (through Latvia) to Berlin (www.railbaltica.org) – the scope of these projects is mind boggling given the size of Latvia! Aside from briefings by the Ambassador and embassy staff, we were addressed by a member of the Latvian Saeima (Parliament), Rihards Kols, Chairman of the Foreign Relations Committee and Krīstine Bērziņa, Senior Fellow of the German Marshall Fund US, and enjoyed their unique perspectives.

We also had a private breakfast meeting with people connected to the US Congress. Needless to say, with this senseless war raging in Ukraine, security concerns were high on the list of topics for discussion. Russia’s offensive has slowed, but the suffering in Ukrainian cities and the senseless slaughter of civilians show no sign of abating. Putin has not kept it a secret that he wishes to restore the Russian Empire and bring Ukraine and the Baltics back into his fold. Resolve against Russian aggression is high and, with the current unity amongst our allies, there does not seem to be any doubt that Article 5 of the NATO treaty will be invoked if this conflict spills over onto NATO soil. We did hear a memorable quote – “for years, we treated the Russian military as if it were the second greatest fighting force on earth; now we can see that Russia has but the second best army in Ukraine!”

We still wear masks at both of our medical offices, in Newport Beach and in Worcester. During our trip to Washington, masks were worn at airports, on airplanes and during Uber rides, but elsewhere we did not see visual signs of a COVID pandemic. The number of infections is certainly decreasing in the United States and Canada but COVID has not gone away – in this past week, 880 deaths occurred in the United States from COVID-19 infections.

In anticipation of upcoming surges, both Pfizer and Moderna have submitted applications (with supporting data from Israel) to the FDA requesting authorization for a second booster shot. China is experiencing an Omicron spike. Europe’s loosening pandemic restrictions are fueling a spike and spread of the BA.2 subvariant of Omicron. These spikes may be a harbinger of what is to come in the United States – so enjoy the summer and this somewhat return to normal while you can!

Invariably, as spring approaches, people start thinking about the bathing suit season and become more conscientious about their appearance. During this time of year, we see an increase in the number of patients requesting breast and body contouring surgery. Abdominal walls may get stretched and lax following pregnancy or weight loss. A flat and tight abdominal wall is something many men and women strive for but cannot always achieve through diet and exercise alone!

Frequently, particularly after childbirth or weight loss, patients present with a weakness of the abdominal wall muscles; during a tummy tuck, the defect between the anterior muscles is repaired (“fascial repair”) before trimming the excess skin and fat. The same navel is reinserted into the skin after the tightening procedure. This procedure can be combined with other abdominal or non-abdominal operations such as liposuction, microfat grafting, facelifts, breast enhancement or other procedures. Combining a tummy tuck with breast enhancement is a frequent request and referred to as a “Mommy Makeover”.

Mother of two children, before and after a tummy tuck (actual patient of Dr. Bunkis)