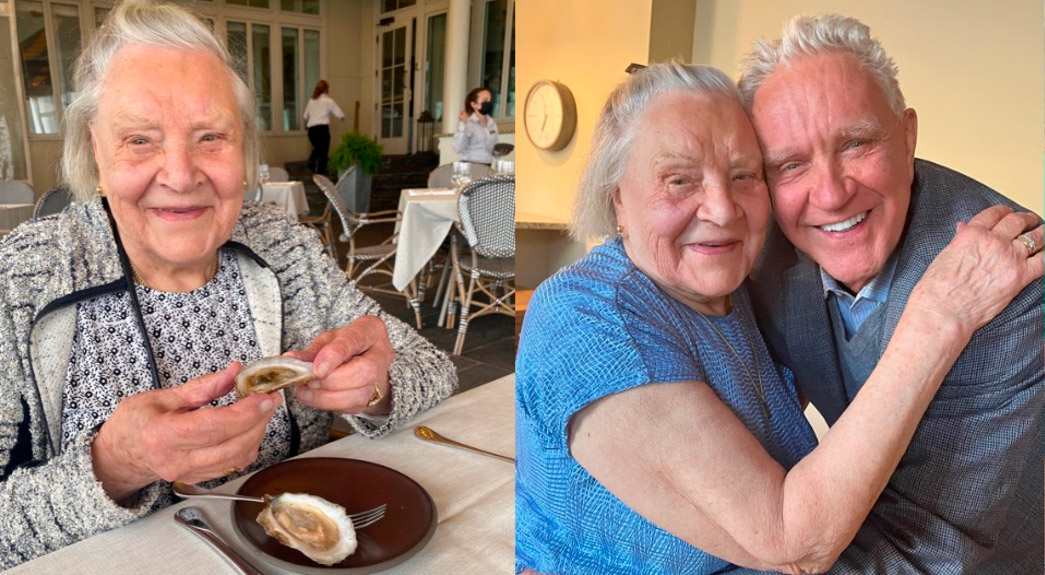 On May 15, 1926, in the newly independent country of Latvia, Jadviga Bunkis was born on the family farm near the village of Indra. Her happy, simple life was interrupted by World War II. The Soviets invaded first and Latvia experienced “Baigais Gads”, the Horrible Year. Lands were collectivized and may landowners murdered or sent to Siberia. My Mom survived and also lived through the German occupation which followed, but when the Soviets were returning a second time in 1944, my Mom left Latvia with nothing but the clothes on her back. Together with her pregnant sister and her infant son, they and headed West to safety (leaving behind parents and all of their brothers).

Many horrible adventures later, after the War ended, they found themselves in the British zone in Germany. They were placed in a refugee camp in Lubeck, where my Mom met my Father and I was born. Our family emigrated to Canada in 1951 and my parents established a comfortable life there. Since my Father’s passing four years ago, my Mom has stepped into the role of family Matriarch.

Dr. Ekstrom and I were honored that she chose to spend her 96th birthday with us in Massachusetts. My sister and her husband drove down from Ontario with my Mom and we all had has such a wonderful time – visiting, sightseeing and reminiscing. This morning, the Canadians returned home – Dr. Ekstrom and I went to U Mass to do surgery together.

I am routinely asked whether “fat can grow back” after liposuction is performed, and if it can grow back in an undesired location. In short the answer is “yes, but not as very likely.” Liposuction is one of the most common procedures performed by Drs. Compoginis and Ekstrom and can be performed safely with low risk. It can be performed both under general anesthesia and under local anesthesia – it is a very effective way to remove unwanted fat. During a liposuction procedure, fat cells are permanently removed from the treated area. These removed fat cells will never return once removed- however not all of the fat cells in that particular area can or should be removed, even with the most aggressive liposuction. The fat cells that are left behind after a normal liposuction procedure can grow if one consumes more calories than their body can burn. Only in rare circumstances can the human body grow new fat cells. While typically we have a fixed number of these fat cells in our body, the few remaining fat cells in a treated area can grow and accommodate more lipid (fat) if the patient gains weight after the procedure. The likelihood of gaining fat unevenly is low.

Typically when a patient gains weight after liposuction, the weight gain is distributed relatively evenly throughout the body but less in previously treated areas. The best advice for patients following liposuction is to live a healthy life and to maintain a consistent, post liposuction weight.

If you want to see if you can have the shape of your body improved, contact us for a complimentary consultation:
please call 949-888-9700 or visit www.orangecountyplasticsurgery.com
Or for MA location, call 508-755-4825 or visit www.salisburyps.com
You can write to:
Dr. Compoginis at compoginis@ocps.com
Dr. Bunkis at bunkis@ocps.com
Dr. Ekstrom at mds@salisburyps.com

There are a number of holidays each year, which are more special than others are,…

Last Friday my wife, Staci, graduated from Loma Linda University with her Doctor of Public…