On to the Yukon 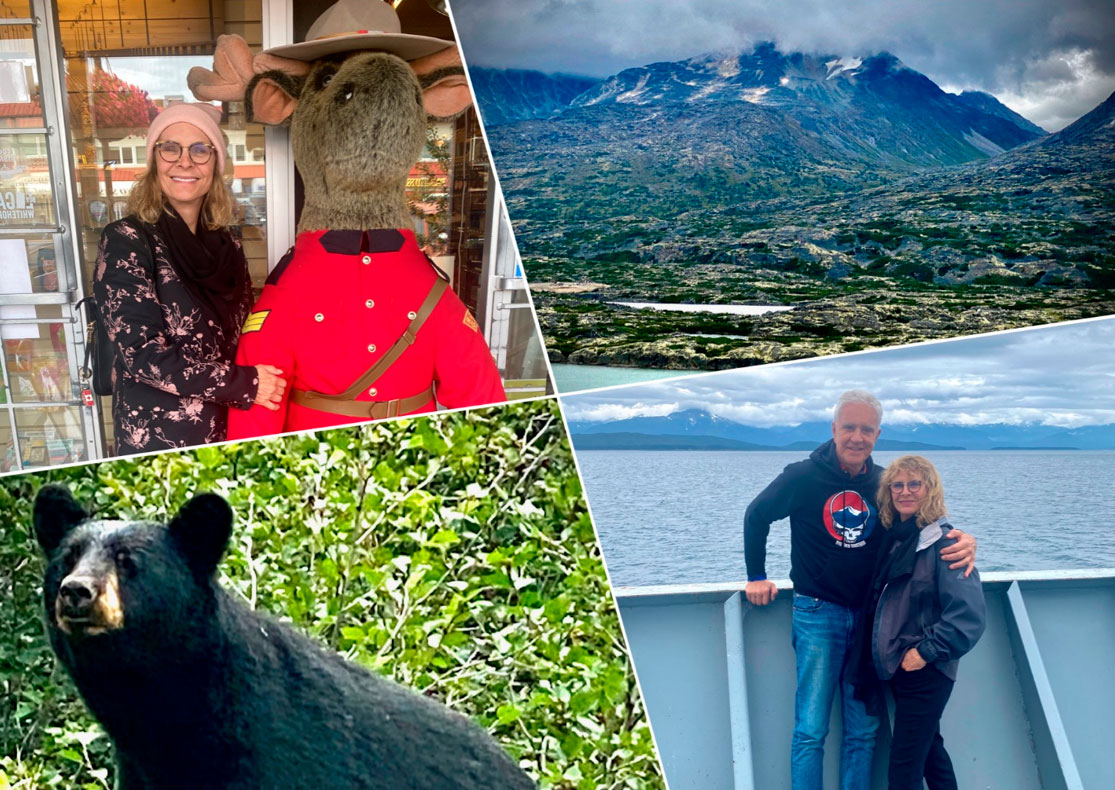 On to the Yukon

We travelled up the Inland Passageway of Alaska to the port of Skagway and from there, had a motor coach take us over the pass to Whitehorse, the capital of the Yukon Territory in Canada. This is the same route 100,000 dreamers took from 1897 to 1899, after word reached Seattle, San Francisco and the rest of the world that Skookum Jim found gold near the Klondike River.

An aboriginal fishing village stood at the junction of the Klondike and Yukon Rivers, and this quickly because a boomtown called Dawson, which swelled to 30,000 inhabitants in 1899. Canadian Mounted Police monitored the passes into the Yukon Territory and made sure that every person entering Canada had a year’s supply of food and equipment to prevent starvation – each Klondiker’s equipment weighed about a ton and was carried in stages by the prospectors.

The harrowing journey in mountainous terrain and frequently in harsh weather, became the source of numerous books about the Klondike Gold rush, including James Michener’s “The Journey” and Jack London’s “Tales from the Klondike” and “The Call of the Wild” – all great reads. Over a billion dollars’ worth of gold (in today’s dollars) was removed from the Yukon. Of the 100,000 prospectors who left Skagway to start the journey to the Yukon, only 40,000 made it to Dawson, only 20,000 finally became prospectors, and of these, no more than 4,000 struck gold.

Only a few hundred became rich – about the same odds as investing in bitcoin today! Dawson is a sleepy tourist town of 1,500 today, and Whitehorse is now the capital city of the Yukon.

People often complain about the excess skin and fat that can droop or hang from the upper arms. As we age and after a significant amount of weight loss the condition can be very apparent. A patient’s genetic makeup can also play a substantial roll. A surgical arm lift is a 1-2 hour procedure that can remove the undesirable excess skin and fat through direct excision (removal).

The scar is usually longitudinal and can be positioned in the inner upper arm or the posterior arm. In very rare cases the incision can be entirely contained in the armpit. Removal of the skin and fat restores the upper arm to the more youthful, toned look it once had. Scar management after surgery is critical.

Female in her 40’s before and after a brachioplasty (Actual patient of Dr. Compoginis)

The scar on the arm does tend to widen compared to surgical scars on other areas of the body – but with adherence to post-surgical instructions, this can be minimized. Compression with a surgical garment may be necessary for several weeks. The patient below is a healthy late 40s year-old female who had 3 children and recently lost over 40lbs. The loose skin on the arm was a nuisance. The benefit of the skin and fat removal was worth the permanent scar on the arm. Recovery is typically 6-8 weeks.

Being Alive versus Living Well

Katie moves on to the Department of State

You are what you eat

I realize that my genes are strong and my family is long-lived. I want my later days to be vital and robust, disease and symptom free.