The Cradle of Democracy

Home » Blog » The Cradle of Democracy 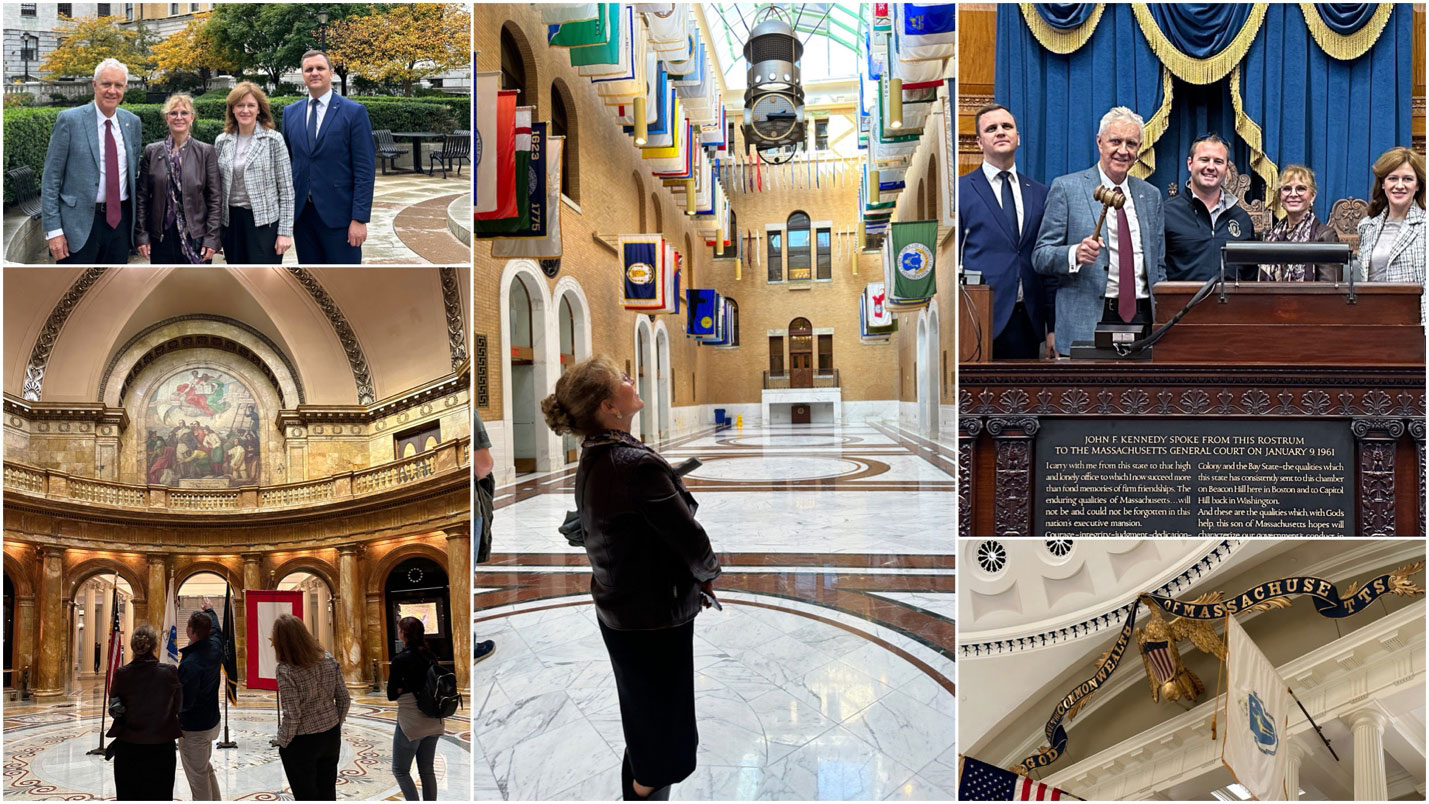 This past week, Dr. Ekstrom and I attended the American Latvian Association annual meeting in Boston. It was so nice to reconnect with old friends and a number of Latvian Government officials.

On Thursday evening, we enjoyed a social program at the Latvian Center in Brookline and then went to a nice French Restaurant in Boston, Mistral, with our Ambassador, Maris Selga, with the Parliamentary Secretary to the Foreign Affairs Department, Dr. Zanda Kalnina-Lukasevica, the Ambassador-at-Large for the Diaspora, Elita Gavele and the Deputy Chief of Mission in Washington, Janis Bekeris.

Yes, there were many stimulating presentations at the meeting, dinners and a ball, but the highlight of the week was a private tour Dr. Ekstrom and I arranged of the State House with Representative Patrick Kearney of Scituate. Patrick was kind enough to take Zanda, Janis, Deb and I on a personal tour of this impressive State Capitol, one of the oldest State Capitols in use today.

The State House was built on 6.7 acres owned by John Hancock, the first Governor of Massachusetts, on land in the Beacon Hill district of Boston, adjacent to the Boston Common. The building was designed by Charles Bullfinch. The cornerstone was laid by Paul Revere on July 4, 1795 and the building was completed in 1798. It has repeatedly been enlarged since, and today houses the State Senate, House of Representatives, the Governor’s office and various other government offices and departments. Paul Revere’s Revere Copper Company, the first to roll copper successfully into sheets in a commercially successful manner, sheathed the original wood dome in copper. The dome is now covered in a distinctive sheath of 23-carat gold. We learned that States that have had a person born in that State that have become president are allowed to sheath their domes in gold (21 States have produced a President and have gold domes) – John Adams, John Quincy Adams, John F Kennedy and George H W Bush were all born in Massachusetts, and surprisingly, all in Norfolk County!

We were able to visit the Chambers for the House of Representatives and the Senate. Numerous murals and statues depicting various periods of our history – and portraits of all past governors of Massachusetts – adorn the halls. Our trip to the Capitol ended with a fruitful meeting in the ornate library with Representative Kearney to discuss trade, educational and cultural opportunities between Latvia and Massachusetts. Thank you, Patrick! I hope that we will all meet next summer in Riga!

Spotlight on Plastic Surgery – Can you "lift" a breast with just an implant?
By Dr. John Compoginis, M.D., F.A.C.S.

Occasionally I have patients ask if there is any way to get a breast lift without all of the scars that go along with it. While there are several techniques to perform a breast lift (mastopexy) with varying incisions/scar patterns, all involve visible scars. The bottom line is the bigger the breast the greater the lift- the more incisions that are required. So,..Can you “lift” a breast with just an implant?

The short answer is “yes” in a very small percentage of patients. There are a few variables that go into the aesthetics of a breast: breast gland volume, skin quantity and quality and nipple position. All of these variables can contribute to a sagging breast and nearly all of them can be improved through surgery. The main idea behind a breast implant is to add volume to a breast and not to change the nipple position. So how would a lift be achieved? Its sort of an illusion – obviously the nipple position can’t be raised on the breast without incisions and scars but when you add enough volume (implant) to a breast in that appears saggy but has the correct nipple position the implant fills the saggy skin and appears to elevate the nipple. The skin envelope of the breast gets filled better and appears perkier with more skin under the nipple visible. The best way to determine if you are a candidate for this type of “lift” is to speak with a board certified plastic surgeon who can determine if you are a good candidate and discuss the all of the risks and benefits.

The patient below is a healthy 56 year-old female with a deflated, saggy breast but with good skin quality and nipple position. A 420cc implant filled the skin envelope well and made the breast appear more perky.

Thanksgiving is a uniquely American holiday but celebrates a universal theme. No matter where we live, no matter what our lives circumstances are, we all have something we could be thankful for.

In New Orleans, one can hear live music each and every night throughout the year! In that regard, New Orleans reminded us of Nashville, which we visited last year.

No other region in America has as diverse, fascinating and visible history as New Orleans. House-by-house, neighborhood-by-neighborhood, history is there to absorb and enjoy.