This patient is 125lb 27 year old woman with a hereditary double chin. She tried using SculpSure to remove the fat but opted to do liposuction for a quick removal.

Okay. This 27-year-old lady has a little extra fat underneath her chin. It was worse. She had a couple of sculpture treatments, but didn't quite get rid of all of it. Today, we're going to come in here and just suction this part here just to give her a better neck contour. You'll see how we do it at Orange County Plastic Surgery.

Okay. Here, we are ready to do this little neck liposuction. We marked a little incision in the fold underneath the chin. I marked the area where she has the extra fat. If you notice here, it's a little thicker. Down here, she's doesn't have any extra. We start by injecting a little bit of local anesthetic. Some of these patients are awake with a little bit of oral sedation. Some of them are completely asleep. If I have somebody who's a little older than this lady who has some laxity as well, not enough to consider a facelift yet or the patient doesn't want a facelift, we can heat this skin up with a little probe that we insert under the skin that heats it with radiofrequency. That'll cause the skin to shrink a little bit and allow us to avoid a facelift, but when you're this young, when you don't have a lot of extra skin, then that's not an issue. It's not necessary.

You can see that, once that little poke is made, we slip the canula in underneath the skin and just move it back and forth. You will see, coming out of this tube, some yellow fat. It's a relatively quick procedure. The healing is quick. This suctioning probably doesn't even take me five minutes. We're just finishing up the procedure here, and what you will see is that her fatty layer is very, very thin now. The extra fat has been removed. That's what we were trying to achieve. The last thing we do is just put on a drop of glue onto the incision itself and we don't have to have any sutures or anything else. She's ready to go home.

Speaker 3: So it's still a bit tender to the touch, but I can already tell the difference. Before when I would pull my face in, it would instantly show a double chin. Now, it's a lot less. I'm a lot more confident wearing ponytails as you can tell. But aside from that, it's not much pain at all, not much bruising. It's pretty good for four days out.

Speaker 2: We can see just under the chin there, if you can point to that area, that is her incision. There's a little bit of glue there still which will come off on its own in a couple of days.

This lady was a little older, had the same thing, some excess fat in here, also had her upper eyelids done. Because she was in her 40s, we knew that just suctioning may lead to excess skin laxity, and we combined her liposuction with a ThermiTight procedure, radiofrequency tightening of the skin, at the same time. I don't think I would have gotten much better result on her if I had done a facelift. Sometimes, that's asking a little bit too much of a liposuction.

This is a lady who was in her early 50s, was a cancer survivor, did not want a major operation, and asked us if we would just liposuction her neck and we did. You can see in the front view that she looks better here than she did before. Also did her upper eyelids. It's not a requirement to get your neck fixed by the way, but these patients just happened to have had their upper eyelids done as well. You'll see in the side view that the fat is gone, but there's still a lot of skin laxity here. This type of a patient would definitely have been served better with a true facelift.

This illustrates what I was trying to say by the optimal procedure for someone who is 50 and has some laxity in their neck and a little drooping of the jowl areas. As you can see, we did a facelift on this lady, and she went from the typical type of a pear shape as you start getting older to a V-shape of youth. That can only be accomplished with a facelift. 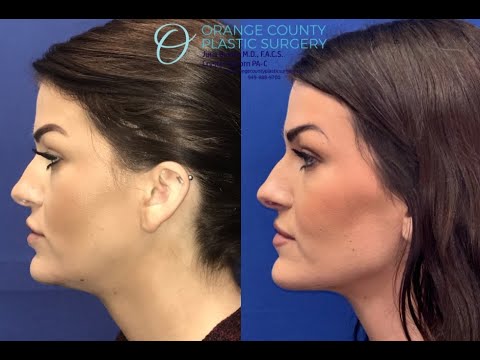 Neck Liposuction with before and after! Ditch the double chin!