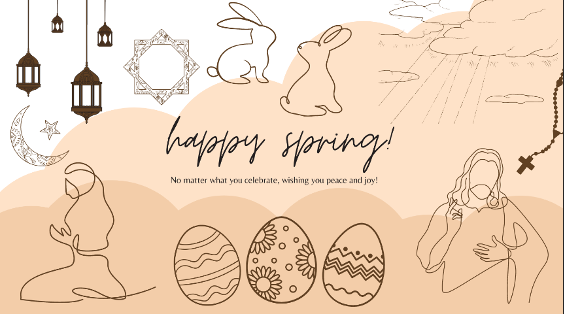 At this time of year, major religious holidays for the three of the world’s great religions intersect – Easter, Passover and Ramadan. To commemorate, the Los Angeles Consular Corps will be hosting its first-ever Ramadan Interfaith Iftar (a meal taken by Muslims at sundown to break the fast of Ramadan). We have invited leaders of Christian, Jewish, Muslim, Buddhist and Zoroastrian communities to pray together for world peace. Muslims believe that in AD 610 an angel appeared to the Prophet Muhammad and revealed the Quran to him – Muslims fast that month as a commemoration of the revelation of the Quran. The Jewish celebration, Passover celebrates the Exodus, the liberation from slavery in Egypt. Easter is the Christian holiday celebrating the Resurrection, which represents Christ’s victory over death and the promise of eternal life for those who follow Him. For those of you not familiar with Zoroastrianism, the official religion of ancient Persia and one of the world’s oldest continuously-practiced organized faiths, based on the teachings of the Iranian-speaking prophet Zoroaster.  Zoroastrianism arose in the second millennium BC, with teachings older than Buddhism, older than Judaism, and far older than Christianity or Islam.

Symbols of the season, including Easter eggs from Latvia.

The egg, an ancient symbol of new life and rebirth, has been associated with pagan festivals celebrating spring, from ancient times. Early Christians borrowed this image of new life and applied it not to the regeneration of the earth but rather to rebirth with Jesus Christ.  Early Christians in Mesopotamia dyed eggs as part of their Easter celebration. This practice was adopted by the Orthodox Church, and from there, spread to Western Europe and the rest of the world. During medieval times, eating meat, dairy products and eggs were forbidden during Lent, so biting into an egg on Easter Sunday was a real treat. Whereas most egg coloring in the US and Canada today occurs with food colors, in Europe many natural dyes and waxes are used, and intricate etching of the dyed eggs completed the project. In Latvia, onion skins were frequently used to produce a variety of brown eggs, which in turn, were frequently etched.

Today we will discuss a nonsurgical treatment available to improve the overall appearance of the eyes. As people age, eyelashes tend to diminish in length and thickness. Thicker, longer, darker eyelashes make eyes look more youthful. Allergan®, the maker of Botox®, the Juvederm® products and many of our breast implants, also has a product called Latisse®, which is specifically designed to enhance eyelashes. Latisse® is an FDA approved medication that will cause eyelashes to grow longer, thicker and darker with a daily application over about six weeks. Thereafter, the medication has to be applied to the eyelashes three times per week to maintain the improvement. We are offering a special on Latisse® for the month of May for those of you who would like to grow eyelashes that are more attractive.